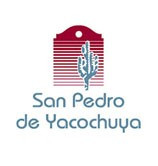 A winery with famous labels opens the doors for us to know its secrets of red and white vines in an environment of unique natural beauty. Located in the Calchaquíes Valleys, Cafayate, Salta, Argentina. It is a privileged corner of one of the highest wine regions in the world.

Arnaldo Benito Etchart bought the La Florida farm and winery in the first half of the 20th century and it was his son Arnaldo who developed the “Etchart” brand with great success in Argentina and abroad. This winery was sold to the Pernod Ricard group in 1996, and a year earlier, Arnaldo already had the wines of the new venture on the market: San Pedro de Yacochuya, achieving a Premium product of excellent international quality.

The winery is located at more than 2000 meters above sea level, being one of the highest viticulture in the world. There are 20 hectares on the farm: 13 hectares. of Malbec, 4 ha. of Cabernet Sauvignon, 1 ha. of Tannat and 2 ha. of Torrontés.

In 1988, Arnaldo Etchart summoned Michel Rolland to develop the red wines for the Etchart winery. That year begins the relationship of work and friendship, with one of the best winemakers in the world. This was one of Michel's first consultations outside of France.

One of the main characteristics of grapes grown in height is that due to the great intensity of the sun's rays, their skins are generally thicker and this translates into wines with a great structure.

The red wines produced in this terroir are powerful wines, with a lot of body and color. Its aromas are reminiscent of red fruits and spices.

02384
$1,500.00
In the mouth it has a very dry entry and a frank mid palate, resulting in spicy and somewhat earthy flavors, with balanced acidity, slightly rough tannins and long persistence.

01056
$1,430.00
Greenish yellow color, subtle citrus aromas with floral edges. In the mouth it has a good attack, balanced acidity and a long finish.

02919
$1,500.00
Ruby red in color, with bluish tones; the nose is dominated by beech and dry leaves, with the presence of fruity aromas. On the palate, it has a pleasant tannins, persistent in the mouth, with a long finish. From Vista Flores, Uco Valley, providing and most importantly maintaining fruit and varietal stability. Pyraznica expression, peas, asparagus, strong...

02097
$1,150.00
Intense ruby red wine with purple hues, aromas of ripe red fruits with a black pepper finish. The palate is distinguished by its ample entry and structure. The finish is very persistent. 100% Cabernet Sauvignon, Agrelo, Luján de Cuyo, 20% of the wine is aged in French oak barrels for 8 months.

01548
$1,600.00
Varietal generous in color intensity that tends to purple-red passing through violet flashes. Primary aromas of blackberries, raspberries, with a spicy background given by its aging in French oak barrels for 9 months and an elegant bouquet obtained from its aging in the bottle. On the palate it is pleasant, sweet and with soft tannins.